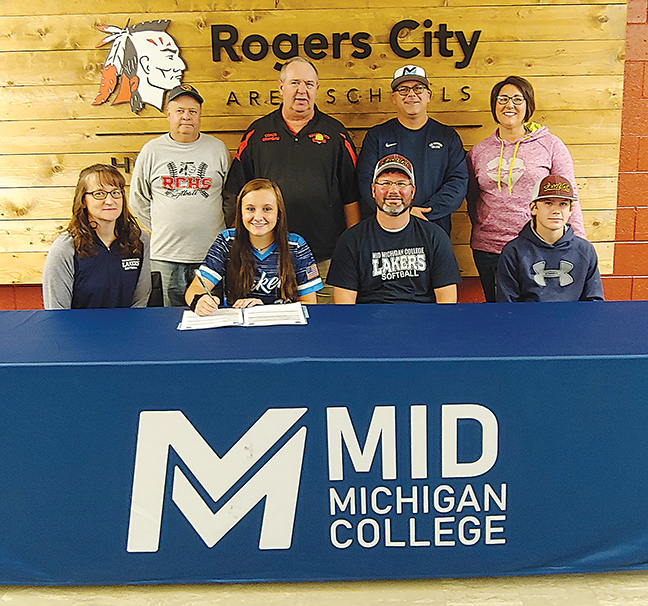 He also watched Altman bounce back, buckle down and ultimately record a win. Her resiliency grabbed Robinson’s attention and made him believe Altman was the missing piece he needed for his next class of softball recruits.

Robinson told Altman as much as he recruited her and Altman officially became a Laker on Friday, signing her letter of intent in front of friends and family at Rogers City High School.

Over the last several years, Altman has seen several of her teammates sign their own letters of intent including Kayla Rabeau, Catheryn Hart and Taylor Fleming.

On Friday, she finally got her turn, becoming the latest Huron to join the college ranks. 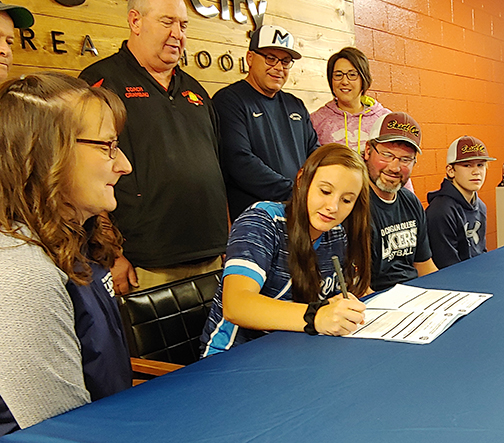 Altman, who plans to pursue studies in a medical field, has a decorated high school career that includes pitching the Hurons to back-to-back semifinals.

She was intrigued by Mid Michigan for two reasons: it’s an up-and-coming program, which just completed its first season this spring and it offered her the chance to venture out beyond Northern Michigan. She visited the Mount Pleasant campus in July and got a chance to pitch and hit.

She’ll join a team that already has a strong Northern Michigan presence. Onaway’s Kennedy Crawford will be one of Altman’s teammates and Tawas’ Julia Frank and Alpena’s Liz Heath played for the Lakers last season.

“I wanted to venture out I guess and I liked how the college is a smaller college so I don’t get lost,” Altman said. “I like how it’s a new program and he’s building it up.”

“She’s been a warrior for us on the mound; a good hitter and a great leader for us. On and off the field she’s a great leader and I wish her the best of luck,” Rogers City coach Karl Grambau said. “I think Mid Michigan is very lucky to get her because she’s going to do great things for them. We’re happy to have her for another year here.”

Altman finished that matchup against Rudyard with seven strikeouts and a walk, while allowing a run on three hits. After Rudyard strung together a pair of hits in the fourth inning to take a 1-0 lead, Altman shut down the Bulldogs the rest of the way, allowing just one hit over the final three innings as the Hurons ultimately won 2-1.

Such a high-stakes game can rattle even the best of pitchers, but Altman stayed calm under pressure. She showed that same poise during earlier playoff wins against Johannesburg-Lewiston, Hillman and Onaway.

“What I liked (the most was) not that she throws hard and has all these pitches. That game had a lot of tension to it. I was there as a spectator and I could just feel the (tension). Every inning that went on, it was 0-0, 1-0, 1-1 and the tension was building,” Robinson said. “This young lady never cracked one time.”

Altman hopes to bring that same calm and big-game performance as a Laker and help Mid Michigan improve its 14-20 record during its inaugural season.

“I always just try to calm myself and take a lot of deep breaths,” Altman said. “I’ve had a lot of stressful moments throughout games and I’ve just got to keep my composure and I know I’ll be able to continue doing that.”