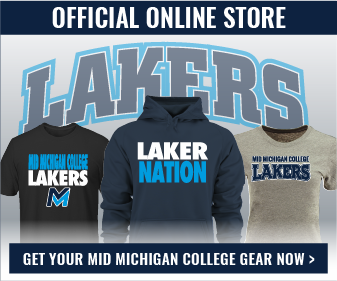 The Lakers have their roots in the very early history of the College. Shortly after Mid Michigan College opened in 1968, it fielded men's basketball and baseball teams. The Lakers would play at high schools and even wear uniforms borrowed from a local school.

Laker Athletics returned in 2008 after a long hiatus. While their original run was short lived, the athletic program left a legacy that today's teams are reviving and building upon. Now, with interest growing, the Lakers are back!

Significant effort has been made to ensure the above EADA surveys and reports meet accessibility guidelines. If you encounter a barrier you can report the barrier at midmich.edu/reportaccessibilitybarrier or contact Laker Athletics at (989) 773-622 x548 or athletics@midmich.edu.